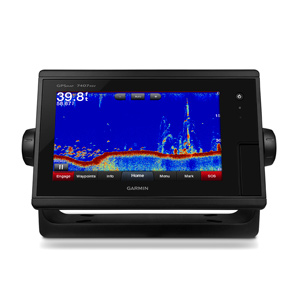 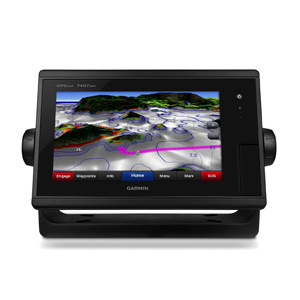 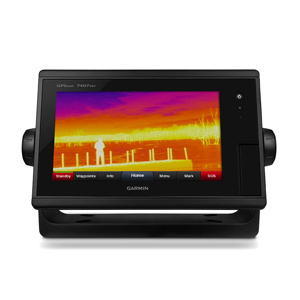 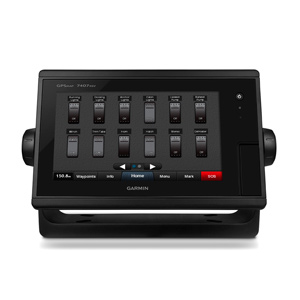 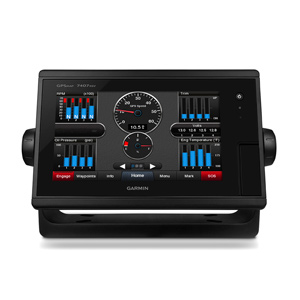 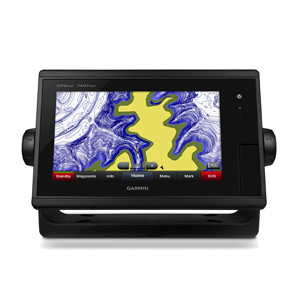 Designed for sportfishermen, cruisers, sailors and sailing racers who demand high performance, ease of operation and feature integration in a chartplotter/sonar combo. The 7-inch multi-touch widescreen GPSMAP 7607xsv combo includes built-in dual CHIRP sonar plus CHIRP ClearVü and CHIRP SideVü scanning sonar with the clearest images on the water. Its internal 10 Hz GPS updates your position and heading 10 times per second. GPSMAP 7607xsv is fully network capable, including Garmin Network and NMEA 2000, and offers the conveniences of built-in Wi-Fi® connectivity.

The built-in sonar capabilities of the GPSMAP 7607xsv include 1 kW dual CHIRP sonar, the most sophisticated sonar technology available for the fishing and boating public. Dual CHIRP sonar provides amazingly clear target separation and definition because it puts even more energy onto the target than CHIRP. It gives you the ability to show low/high, med/high or low/med on the screen at the same time, enhancing your ability to distinguish between game fish and balls of bait fish. It also includes both CHIRP ClearVü and CHIRP SideVü scanning sonar that provide nearly photographic sonar images of fish and structure that passes below and to the sides of your boat. Garmin ClearVü and SideVü provide the clearest scanning sonar images on the water. Also supported are 50 kHz/200 kHz, 77 kHz/200 kHz and Minn Kota® and MotorGuide® trolling motor transducers (sold separately). GPSMAP also includes sonar-recording capability that coordinates the timing of the sonar return with your boat's position and saves digital information for playback on a computer using HomePort™ planning software.

These highly detailed freshwater maps include 17,000+ U.S. lakes, rivers and reservoirs. Included in those are more than 5,700 HD lakes with 1-foot contours shoreline to shoreline; excellent detail of underwater features plus Safety Shading that allows you to designate a minimum depth; interstates, highways, general roads and bridges; designated fishing areas; and points of interest, such as docks, boat ramps, marinas and campgrounds.

You can add your choice of Garmin marine radar, including our powerful xHD2 open array radars or xHD dome radars that pairs ease of use with advanced open array features.

GPSMAP 7607xsv allows you to share features with other compatible GPSMAP units, such as radar, GSD 24, GSD 25 and GSD 26 sonar modules, supplemental maps, and user data, including waypoints, routes and tracks. User data entered into 1 chartplotter can be automatically synced with other chartplotters in a network.

Fast, responsive 10 Hz GPS/GLONASS refreshes your position and heading 10 times each second to make your movement on the screen more fluid. It makes dropping up to 5,000 accurate waypoints — and finding your way back to them — quick and easy.

Upgrade with the Best Maps on the Water

Enjoy the ability to control all compatible FUSION-Link-enabled audio systems directly from your compatible chartplotter display.

Built-in Wi-Fi/ANT for use with Garmin Helm™ and BlueChart Mobile.

The GND 10 black box interface seamlessly integrates Nexus instruments and sensors with the Garmin family. It converts data between the Nexus network and NMEA 2000 to provide trouble-free compatibility between Nexus and Garmin products.

View and Control Your Device from a Smartphone or Tablet

Garmin Helm allows you to view and control your compatible Garmin chartplotter from a compatible smartphone or tablet while providing enhanced situational awareness for the mariner. Easily switch between portrait and landscape mode to accommodate mounting preferences. When using an iPhone® or iPad®, you can even record a movie of your chartplotter screen to share with friends and family. Download from The App Store™ or Google Play™.

Get Your Apple® Device Onboard with BlueChart Mobile

With BlueChart Mobile, a free app downloaded from the App Store, you can plan marine routes on your iPad or iPhone then wirelessly transfer them to your boat’s compatible networked Garmin chartplotter. Even if you don’t have a Garmin chartplotter, you can still take advantage of the tremendous features of BlueChart on your Apple device.